In 2009 the Government of Ontario released its Lake Simcoe Protection Plan, which called for Lake Simcoe’s phosphorous pollution to be reduced by 50% to 44 tonnes a year. According to the Plan, this is the reduction in pollution that is needed to protect the lake’s cold-water fishery and to prevent excessive weed growth and algae blooms.

Responses to the question:

Do you believe that Lake Simcoe’s municipalities should formally request that the Government of Ontario promptly fund and implement a plan to reduce Lake Simcoe’s phosphorous pollution to 44 tonnes a year by 2030?

Lake Simcoe is a huge asset to our community and it must be protected. Provincial funding is absolutely necessary since the municipalities involved can’t afford to shoulder the costs.

I believe protecting the fisheries and natural appeal of Lake Simcoe is very important in Brock Township, along with the neighbouring municipalities around the lake. I definitely support this initiative.

No candidates have responded yet.

Yes, in an ideal world it should be done however, with the sewage being pumped into the lake by Barrie alone , this can be problematic. This has been an ongoing problem and since Barrie is allowed to grow, so will the problem.Perhaps the time has come to stifle the enormous growth ALL around Lake Simcoe until the problem can be addressed and a workable solution can be reached. As for the other Municipalities, I do not know. I am most interested in knowing what if anything, Beaverton is sending into the lake. All the Municipalities bordering the Lake should be held accountable. I doubt at this time that I would feel safe eating fish taken out of Simcoe if the problem is as bad as you are saying. I know that the Beaverton Beaches have been closed this year due to a bacterial problem and I am aware that a food farming company has stopped pouring bad silt into the Lake causing a bacterial problem.
All these issues need to be monitored and handled on an ongoing basis. Making demands and ultimatums isn’t the answer. Another venue needs to be sourced. Working together, perhaps, we can all reach a doable solution . That being Federal,Provincial and Regional. Three calm heads are better than one.
As a Miner and Prospector in Northern Ontario, I am very well aware of the responsibilities polluters must acknowledge when it comes to water. The Mining Industry in Ontario is held to a very high , strict standard so, in my personal opinion, should Municipalities be.
I have attended your meetings in Sunderland AND I am an avowed Naturalist and Conservationist. The daughter of a Farmer I was brought up to respect the Land and the Water . Simple as that.

This is absolutely what should be done. I am proud to have worked for years, with residents, and all levels of government to protect the health of Lake Simcoe. Notably, the toxic silt runoff near Beaverton. I also strongly oppose the UYSS.

Lake Simcoe has been in my life as well as dating back to my great grandfather who came from England and settled on Thorah Island. I have been involved with TIRA (Thorah Island Rate Payers Association) for 15 years and was President.
Above I am sure would be a yeas but would like more information. 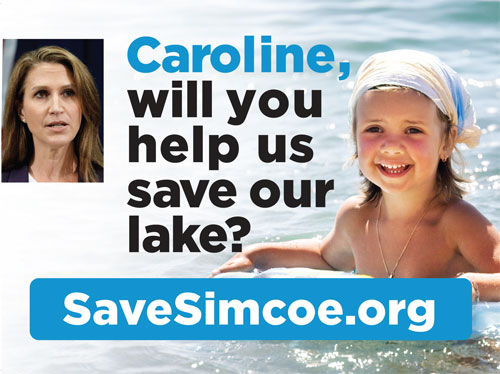